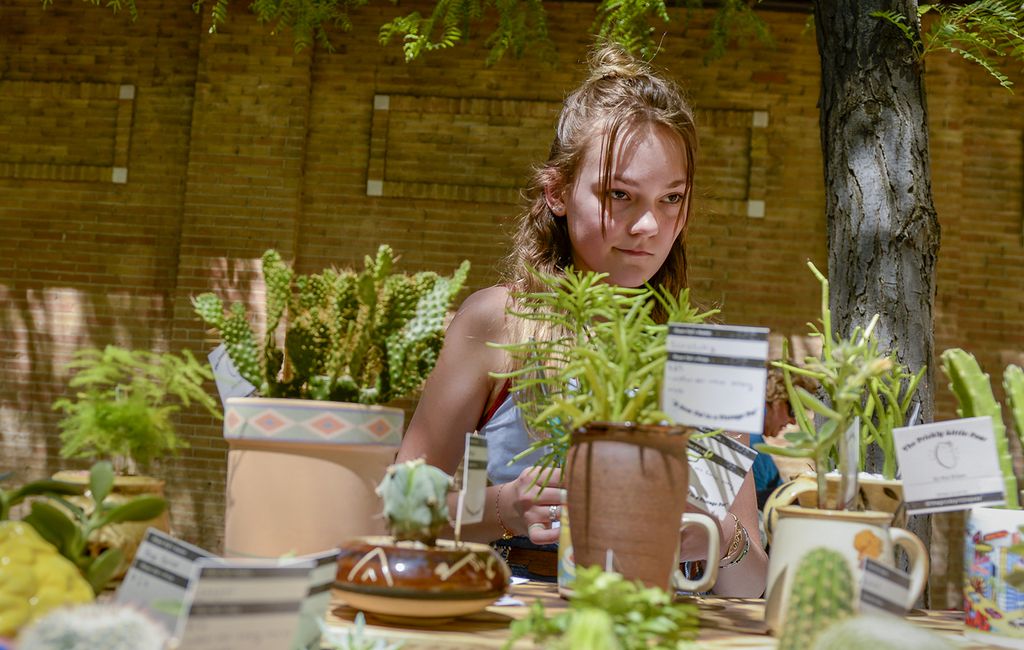 (Leah Hogsten | The Salt Lake Tribune) Ava Brown, 13, from Holladay, sells cactuses and other succulent plants, repotted in vintage ceramic containers at the 2019 Craft Lake City DIY Festival. She was among the sellers on Kid Row, where children 14 and under make and sell their products. Craft Lake City’s 2021 DIY Festival kicks off Friday, August 13 and runs through Sunday, August 15.

Craft Lake City’s DIY Festival is an annual celebration of Utah’s DIY (“Do It Yourself”) creative culture. Starting on Friday, August 13, this year’s festival will again bring together hundreds of artisans and tens of thousands of craft-loving visitors at Utah State Fairpark.

“People [are] excited to get back together again and build community,” said Angela Brown, executive director at Craft Lake City, the Utah nonprofit behind the festival. She expects “a lot of great energy” at this year’s event.

The 2021 DIY Festival is full of new additions: stilt walkers, a busking stage, and a Saturday spotlight on Pacific Islander heritage.

As always, the event will feature a wide variety of artists, craftspeople, and performers. Here’s a preview of a few of the talented exhibitors and festival highlights you can encounter this weekend.

Robin Banks is an artist and illustrator whose brightly-colored apparel, posters, and board games combine a kitschy retro look with a mischievous sense of humor.

Banks works in a variety of mediums, including screen printing and digital painting. Their art draws from the visual language of the 60s, an era which they find both politically and aesthetically energizing.

“The sixties were very similar to where we’re at now,” they said. “That’s when a lot of it started – the protest movements and the fight for civil rights.”

Banks’ art career began in their early 20s, when they started designing posters and album covers for punk bands. In recent years, they’ve focused more on ad work, fine art, and apparel, though they still do work for bands on occasion.

For Banks, the DIY Festival is an opportunity to engage with Salt Lake’s rich art scene. “We live in an unbelievably diverse city for arts and food and entertainment,” they said. “And I think Craft Lake does a great job displaying that.”

Bomba Marilé is a seven-part performing group that has been bringing the traditional Bomba style of dance and music to Utah since 2017.

Bomba is an improvisational art form that has been around for about 500 years. It originated when enslaved Africans were brought to Puerto Rico and was sometimes used as a means of organizing rebellions against slave owners.

According to co-director Miriam Padilla Vargas, the style is all about connectivity between dancers and drummers. “The dancer makes accents with their skirt or their body, and then the lead drummer will try to make accents to match the movement of the dancer,” she explained.

“There’s a lot of relevance, strength and power in this, Vargas added.

Visit Bomba Marilé’s website to learn more about the group and their work.

‘The birth of portrait photography’

Chris Blackburn of Blackburn Studio is known for his dreamlike paper prints and velvety black and white portraits that look more like paintings than photographs. Blackburn is an “alternative process” photographer who specializes in unconventional photographic techniques that predate the Civil War.

One of these techniques is wet plate photography, which Blackburn described, laughing, as “a little bit more complicated than pointing your camera and pushing a button.”

It took Blackburn around 8 months of practice to feel proficient in his complicated craft, which is filled with opportunities for error during each step of the eight-step process.

For a visual artist, he spends a lot of time doing chemistry – making his own developers, silver nitrate solutions, and collodion mixes.

Blackburn enjoys participating in events like the DIY Festival because they allow him to share his intricate process with others. “It’s almost a performance piece,” he said.

Visit the Blackburn Studios profile to learn more about his work.

Sarah May is a multimedia artist, weaver, and storyteller whose work explores her identity as a Latina woman and connects her with her indigenous ancestry.

“My mom is a refugee and immigrant from El Salvador,” she explained. “I grew up here and haven’t had the opportunity or family connections to go back to where my mom came from.”

Textile work helps May engage with the artistic traditions of her ancestors. “My indigenous ancestors were textile artists,” she said. “I felt inspired to teach myself how to weave.”

Each one of May’s circular woven ornaments is unique, filled with a variety of colors, textures and sizes of yarn arranged in elaborate, interlocking patterns.

Her favorite part about displaying at festivals is the sense of connection she feels with people who appreciate her art. “I believe that the right person is drawn to the piece that’s right for them,” she said. “Hearing why people resonate with that – it’s like a gift.”

To learn more about May’s artwork, visit her website.

Capoeira combines elements of dance and martial arts to create performances that are both aesthetically pleasing and physically rigorous.

Jamaika describes the form as “a defense disguised as a dance.” Enslaved Africans in Brazil practiced capoeira to hone their self-defense skills while under oppressive plantation surveillance.

For Jamaika, capoeira allows him and his students to learn about themselves. He’ll have a student who will be absolutely certain that they can’t do a cartwheel – “six months later,” he said, “they’re doing backflips.”

He encourages everyone to explore capoeira, regardless of age, ability, and background. “Come and try a class and see if you like it,” he said.

Discover more about the art form and sign up for a class here.

‘I stumbled into a community of doll makers’

Shesser is inspired by pop culture, from pouty Monster High dolls wrapped in black lace to an Anck-Su-Namun doll from The Mummy covered in intricate beading. “I pick characters that I like that are aesthetically pleasing,” she explained.

Shesser stumbled into the internet dollmaking community by accident. She had seen a figurine from one of her favorite TV shows online and wanted to buy it – that is, until she realized it was handmade. “I got super intrigued and wanted to make my own,” she said.

This year’s DIY Festival is Shesser’s first chance to display her work in person. “It’s pretty nerve-wracking,” she said, “but I’m excited to meet lots of people and see their work and show them mine.”

To explore the fanciful world of Scarab Dolls, check out Alexandra’s Etsy account or visit her Instagram @scarabdolls.

Donate to the newsroom now. The Salt Lake Tribune, Inc. is a 501(c)(3) public charity and contributions are tax deductible